What I learned on Integrated Marketing Communications 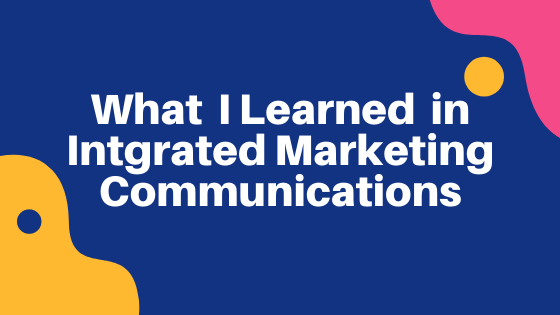 Well talking about the knowledge I gained with various lectures on IMC classes and various article reviews, It was quite interesting. Before the classes started I had not thought the classes would be this much interesting. Here I have written in brief about the thoughts that went in me while taking IMC classes.

Our teacher had also made us review another article related to Marketing Myopia and the topic was very interesting to me. Marketing myopia is an attitude of a marketer that what he thinks is right and is the perfect strategy. Here, a company thinks and focuses on its products and doesn’t focus on what need does the product satisfies. After studying the article I began to relate the article with cases such as Nokia and Kodak. I was recalling how Nokia’s myopic act had made it lose its competitive ground in the mobile industry. I also recalled the Kodak as well which was a leader camera and filmmaker before digital cameras were started and later became kodak to bankrupt because of the myopic act. Studying about the Myopia made me conscious that I could be affected with it as well and made me self aware of myopic thoughts that I should not have.

To have a practical understanding of IMC, we were made to choose an imaginary product and work on it. Being a technology enthusiast, I proposed to work on smartwatches as a product and after a lot of discussions, we agreed on choosing smartwatches a product. I find the practical sessions we did on the project very helpful and I assumed that that’s how we work if we were to work as the marketing managers. Even though I had studied marketing decisions in previous semesters, I didn’t recall much from that I guess I hadn’t understood it well. We were made to work on segmentation, targeting and positioning regarding the product. I actually didn’t have a clear idea of how to do STP until our group worked on it. The discussions with the group went very well and that was the day when I learned actually about STP. Now that I have worked on it, I feel much comfortable if I have to perform it with other products as well. Another interesting part was naming and making the logos for our product. After a long discussion and searching various names on the internet we agreed on naming our smartwatch product as Pyxix brand and each of the members of the group came up with different ideas for a logo. On this note , I at least learned some basic photoshops to make the logo as well. I had always been looking to learn and still looking to learn some photoshop skills and I did learn some while doing it as well.

Finally talking about the class where our teacher did a workshop like a class on Design thinking was something I have always been waiting for. Having a goal to be a successful entrepreneur in life, I had been fond of the courses regarding it. And I had always heard about design thinking a lot but did not know what actually it was. I wished to take a whole course of design thinking but unfortunately, the course was not available but because of the workshop I got the basic concepts of design thinking which I had always been looking for. Through the workshop, I have basically understood design thinking and the processes and steps involved in it. I do understand that it’s a long course and our teacher gave it as a crash course for it, but I believe that now if I tried to learn design thinking by myself I can learn it on my own. Since I look to coach entrepreneurs in the future I look forward it learn it detail and someday I’d like to conduct workshops and training regarding this as well.