My Experience in Making Advertisement for IMC project 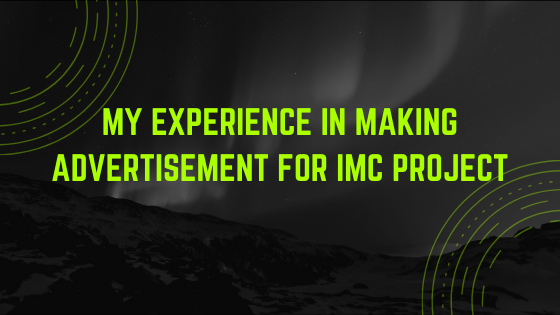 Finally the end of 4th trimester, I am feeling relieved after a long time. Usually, the end of exams gives pleasure feeling but due to the project completion deadline right after the exam of many subjects simultaneously, It was a hectic week. Among other assignments, IMC subject had the toughest assignment but a fun one. As a final project, our group had to prepare a complete integrated marketing plan for our product. As our product, our groud had selected to work on smartwatch which we named it ‘Pyxis’. Not only making a marketing plan but we also need to conduct media audit for our competitor product and make a video advertisement for our product which was a very tough job for nonprofessionals. Here In this blog, I will be explaining about my learning and reflections around what happened during the advertisement making process.

Our group had only a few days remained before the submission of the final presentation and we had a lot to do. From complete concept creation to the editing of the videos we had a lot of things to do and we were not clear on what to do as all the team members have their own opinions and concepts. For our advertisement, I had come up with a concept of making the protagonist character walking forward while all other people in the background walks back. What I wanted was to portray the users of pyxis are smart and always smart and always a step ahead. I had thought to do it by making the protagonist waking backward and reversing the video to make that effect. However, while discussing with the group everyone had their own concepts and We kept on discussing different television serials.

After a  lot of gossips about ads concept by looking ad others advertisement our group member presented an idea to associate the product with certain features and attributes that will define the pyxis. Our group was associating the product with term durability which personally I hadn’t too much fascinating and suggested to associate with smartness. Our group member commented that as too mainstream and the majority did not support it and sticked on durability factor which was later changed to durability, productivity, and style.  I and our group made a story script and made a funny looking storyboard hoping to assist on our video clip then we were looking for a venue to shoot that advertisement.

Since there were no appropriate places, I offered that to shoot it at my home. Since I had been planning to make vlog which I should have by now but have not been able to, I had some necessary equipment for making videos. I even had made a self-made light reflector for making videos that came into use for making this advertisement. I was happy to offer a venue for shooting the ads. Also, I acted as a decent delivery guy in a video, which is my first acting video every in my life. Though we had planned not to reveal our faces on video thus I wore a cap. Our group had a lot of fun and new experiences while making videos.  Many funny incidents occurred while making videos which made the making of videos more fun. We had to make many takes for even making a short video. There were a lot of blooper videos made because of me and other friends’ funny actions.

I never had this kind of video making experience ever in my life but I always wanted to since I was planning to start a vlog. I needed to learn premier pro software for making the video and working on this project gave a lot of insights into working on videos. All the team members were giving their feedback to make the video much fun and better which was a good team effort shown by the group. All the group members were giving efforts based upon skills and it was quite a lot of fun. The video making was very tough so I also requested one friend to help us so as to complete the project faster. I even made a website of pyxis to demonstrate on the final but only got to show the picture of it for which I felt a bit bad about it.

All in all, I really had a great experience working on this project and learned many marketing stuff which I believe is going to be helpful in the future. I learned many technical as well as marketing skills and had a great time even though it was very hectic and finally, I am now happy that the trimester is over.